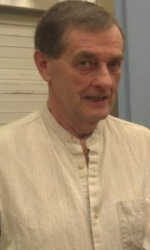 Richard C. Mayo, 77, of Factoryville passed away at his home on Monday Feb 22nd.  He was born in Chinchilla on March 31, 1943 and he was the son of the late Alvin and Dorothy Melville Mayo.  Richard was married to the former Carolyn Menichiello for 55 years.

Rich was a graduate of the Clark Summit Abington High School and he enlisted in the U.S. Army after high school.  He was a technician at P&G and retired in 1998.  Rich was an avid outdoorsman and enjoyed spending time outside.  He enjoyed genealogy and he was an avid Yankees Fan.

In addition to his parents, he is preceded in death by a sister Linda Vermeullen and a step sister Doris Corcoran.

In addition to his wife, he is survived by brother Alvin Mayo of Scranton, and children; Sherri and husband Larry Balog, Harrisburg, Timothy and wife Patricia Mayo, of Scranton, Lori and husband Alan Otto Dalton, 3 grandchildren, many nieces and nephews.

A graveside service will be held at a later date at the Evergreen-Woodlawn Cemetery Factoryville.  For online condolences or direction visit www.aplitwinfuneralhomes.com.