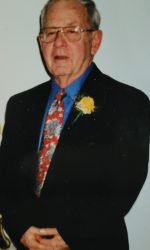 Robert Albert Driesbach, 96, of Tunkhannock passed away at his home on Oct. 28, 2022. He was born in Forty Fort on Jan. 21, 1926 and was the son of the late Albert and May Vance Driesbach. He was married to the late former Betty Zinn whom he married on Jan. 27, 1951. Robert graduated from Wyoming Seminary and Gettysburg College with a BA in 1951. He owned and operated Lewistown Tire, BF Goodrich, Oneida Tire of Huntington and Gas and Tire of Port Royal . His passion was piloting his Piper Cub, playing golf, and singing with the Barber Shop Quartet.
He was a member of the Shriners, Masons, and VFW.
He was a veteran and member of the Tunkhannock United Methodist Church.
In addition to his parents and wife he is preceded in death by his brother, sister, son Robert and grandson Zack.
He is survived by his children; Jane Bartron of Tunkhannock, William Driesbach of Lewistown, Sally Kanagy of Tunkhannock, 5 grandchildren and 7 great grandchildren.
Funeral service will be held at a later date. For online condolences visit www.aplitwinfuneralhomes.com. Contributions may be made to the Home Health Hopice, SPCA, and the Tunkhannock United Methodist Church.