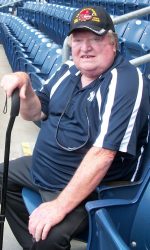 Share Print
Robert Allen Burridge,76, of Rush Twp. passed away at the Lourdes Hospital Binghamton on Dec. 7th, 2022, surrounded by his wife of 44 years, daughter and son.  He was born in Wilkes Barre on Oct. 24, 1946, and he was the son of the late William and the late former Emma Tedeschi Burridge.  He was married to the former Connie Penrith and on January 28, 2023 they would have celebrated their 45th wedding anniversary.
Bob was a 1965 graduate of Elk Lake High School. After finishing high school he enlisted in the Marines and fought in the Vietnam War. He then went on to work at Proctor and Gamble and was currently retired.  He enjoyed hunting, fishing, horses, westerns, watching his beloved Yankees, and spending time with his family. He was a devoted husband, father, brother, uncle and the best poppy in the world.
In addition to his wife, he is survived by his daughter Heather King and Husband Dan of Throop granddaughter Nora Grace King of Throop and a son Adam Burridge of Lawton, brothers William and wife Barb Burridge of Springville, Jerry Burridge and husband Michael Madonna of Manhattan Beach, Ca, sisters Gloria Ivey and husband Bill of Meshoppen, Debbie Downs of Shelby N.C and many nieces and nephews.
Funeral services will be private at the convenience of the family.
For online condolences visit www.aplitwinfuneralhomes.com.