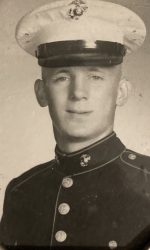 Robert M. Schultz, 81, of Tunkhannock passed away at the Allied Hospice Center, Wilkes-Barre on Aug. 25, 2021.  He was born in Scranton on June 1, 1940 and he was the son of the late William and Anna Hronich Schultz.

Robert was married to his high school sweet heart and best friend Shirley Condon Schultz, passing away the day following their 58th wedding anniversary. They were a classic love story, and they were fortunate to have many wonderful years together raising their children and enjoying their grandchildren.  They enjoyed traveling to Cape May, Atlantic City, Maine and Connecticut in their later years.

Robert was an outstanding football player and a 1958 graduate of West Scranton High school. He proudly served in the U.S. Marine Corp.  While in the Marine Corp he was stationed in Japan, Cuba, and many other countries.

Affectionately known as “Roper” he contributed many years of service to the youth of the community.  Roper coached many years of Little Leage baseball and he served as the president of the TBA for over 25 years.  He also served as a coach and commissioner of the Tunkhannock entry in the Babe Ruth League.  He served as a commissioner of the American Legion Program, and was responsible for the entry of Tunkhannock into the Wyoming Valley American Legion League.  He headed the construction of the Baumgartner Sports Complex on Rt. 92 Tunkhannock.  In 2008 he was honored by having the baseball field at Baumgartner dedicated to him as the Bob Schultz field.

He also served on the board of directors of the Endless Mountains Wrestling Club and was past president of the Tunkhannock Booster Club.  In 1987 he was presented with the Sam Keithline Award in recognition of this service to the community’s youth.

In his early retirement he oversaw the renovations of the Tunkhannock High School Outdoor Sports Complex.

He was one of the first employees hired at the Procter and Gamble Plant in Mehoopany, called Charmin at the time.  He worked in management for nearly 30 years.

He took particular pride in his home, and enjoyed working with his hands.  There was nothing that Roper couldn’t fix.  Much of his retirement was spent helping his children with home building and improvements.

His greatest joy was watching his children and grandchildren’s sporting events and activities.  He spent countless hours traveling to and enjoying baseball and softball games, swimming, and diving meets, football games, soccer games, volleyball matches, basketball games, dance recitals, Lacrosse games, cross country and track and field meets.  He was also known as “Pa” to not only his grandchildren but also to a lot of their teammates and friends.

He was a die hard Penn State Nittany Lions fan and a life long NY Yankees and Pittsburgh Steelers fan.  He looked forward to his annual fishing trips to Wolfe Lake in Ontario Canada with his brother and then his kids, nephews, and friends.

In addition to his parents Robert is preceded in death by; sisters Adeline Lindsey, Dorothy Davis, Jeanne Capozza, brother William Schultz, and a daughter in law Robin Montross Schultz.

A Mass of Christian Burial will be held Wednesday at 10am from the Nativity BVM church 99 E Tioga St, Tunkhannock.  A viewing will be held Tuesday from 4-7pm at the Harding-Litwin Funeral Home 123 W. Tioga St. Tunkhannock.  Interment will be at the Sunnyside Cemetery Tunkhannock.  For online condolences or direction visit www.aplitwinfuneralhomes.com  In lieu of flowers memorial contributions may be made to the Veteran with PTSD Equines for Freedom P.O. Box 53 Factoryville, Pa.18419.