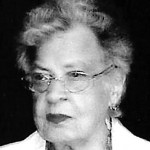 Ruth E. Shaw Davis, 95, of Wilkes-Barre passed away peacefully at the Wilkes-Barre General Hospital on Monday evening February 24, 2014. Ruth was born April 28, 1918 in East Lemon, PA the daughter of the late Arthur and Marion Stark Shaw. Ruth was a member of the 1935 graduating class of Tunkhannock High School. She was predeceased by her first husband Robert B. Ganley in 1962 and her second husband Luther Davis in 1996. Ruth was a former member of the Tunkhannock United Methodist Church. During the 1950’s Ruth was nominated by PA Governor George M. Leader and unanimously confirmed by the State Senate to the vacant office of Wyoming County Treasurer. Ruth was also a special tax investigator for the Pennsylvania Department of Revenue, Division of Sales and Use Tax. She also served 10 years as Vice Chairman of the Democratic Committee in Wyoming County. Ruth enjoyed her backyard and was an avid gardener and was proud of her vegetable and flower gardens. Ruth was also predeceased in death by brothers Arthur W. and Charles E. Shaw. She is survived by son David L. Davis II, his wife Virginia and Grandson David III of Kingston, PA. She is also survived by sisters Mary Tripp of Tunkhannock, Jean Loomis of Montrose and brother Edward Shaw and wife Lois of Coatsville, PA and Ocean Isle Beach, NC. and numerous nieces and nephews. The family extends special thanks to her dear friend and longtime loyal caregiver Roberta Borum and Ruth’s nephew John Rowlands for always being there for her. Additional thanks are extended to the 6th floor staff of Wilkes-Barre General Hospital, Kingston Health Care Center and Erwine Home Health and Hospice for their loving care and kindness. Viewing will be held at the Harding-Litwin Funeral Home 123 W. Tioga Street Tunkhannock from 4-6 PM on Thursday 2-27-14 followed by funeral services at 6PM, Rev Peter F. Geschwindner of the Tunkhannock United Methodist Church officiating. Internment will be at Sunnyside Cemetary at a later date. Memorial contributions, if desired, may be made to the charity of the donors choice. For directions or online condolences please visit www.aplitwinfuneralhomes.com