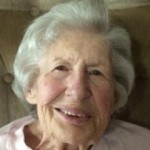 Ruth June McGregor,89, of Factoryville died Tuesday morning Dec. 27, 2016 at her home with her family at her side.   Ruth was born in Scranton on March 21, 1927 and she was the daughter of the late Edward and Anna Korban Herman.  Her husband James died in 2003.

She enjoyed helping her husband run the farm and raising her children.  In her spare time she also enjoyed ceramics, sewing and crafts, and attending to her numerous house plants.

In addition to her parents and husband she is preceded in death by two twin sons Mark (1952) and Calvin (2014) and a sister Jean Albrecht.

Ruth is survived by a daughter Joan McGregor, a son Robert and wife Dixie, and a grandson Scott all of Factoryville, cousins, nieces, and nephews.

At Ruth’s request there will be no calling hours or funeral services.  Burial will be at the convenience of the family.

In lieu of flowers, donations may be made to Hospice of the Sacred Heart 600 Baltimore Drive Wilkes-Barre, PA 18702 or the charity of your choice.