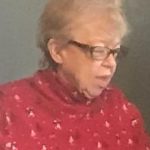 Sandra E. Montanye, 79, of Tunkhannock passed away at her residence on Dec. 27, 2019.  She was born in Tunkhannock on March 12, 1940 and she was the daughter of the late Howard and Vivian Capwell Ellsworth.  She was a graduate of the Tunkhannock High School.  She was married to Harvey Montanye.

Sandra was a member of the Red Hat society and enjoyed her friends and family, especially her great-granddaughter.

In addition to her parents she is preceded in death by a sister Joan Eustice.