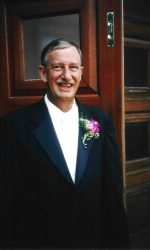 In addition to his parents, Spencer was preceded in death by his brothers, Norman and Mark Clark, and nephew, Preston Sherman along with his beloved and faithful companions, Ginger and Rascal.

Spencer graduated from Tunkhannock Area High School in 1973 and worked exclusively at Procter & Gamble until he retired in 1999. His hobbies included fishing, playing cards, skiing, spending time with his friends and family, playing “fingers” at his favorite spot – the American Legion, picking on his family members, quick with a joke or prank, traveling throughout the U.S., foodie (aka accepting all food and dessert donations), watching Old Western movies, grilling a mean BBQ chicken, and, (again) fishing.

Spencer’s life was spent in northeastern Pennsylvania, although he traveled much of the country. Trips included family vacations to Colorado, Arizona, Florida, Canada, California, New York, and everywhere in between where he would spend time touring the many state parks, and fish for bass, salmon, walleye, and crappie. His residence for over the last decade was a small cabin on the picturesque Crescent Lake where he would often dream about moving to Florida during the height of a Pennsylvania winter.

A proper social distanced celebration of life will be held at the Lemon Cemetery on November 7, 2020 at 2:00 pm.

He bravely fought and defeated cancer 5 years ago so, in lieu of flowers, donations can be sent to the American Cancer Society an organization Spencer fully supported.