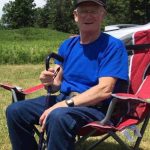 Stanley C. Ward, 76, of Monroe Twp. passed away at the Timber Ridge Heath Care Center on Dec. 19, 2020.  Stanley was born in Springville on May 2, 1944 and he was the son of the late Clifton and Ruth Foote Ward.  Stanley was a U.S. Army veteran and worked as a Mason for 27 years. He was married to the former Evelyn M. Matushefske for many years. Stanley enjoyed hunting, drinking beer, and helping people.  If you needed a helping hand Stan was always there to give you one, or tell you, “just one more.” In addition to his parents Stanley is preceded in death by his sisters, Gloria Barnes, and Rose Carey; brothers, Tom, Manley, Roger, and Edward Ward. In addition to his wife, he is survived by a sister Ruth Ann Bunnell, and his children; Stanley G. Ward, Tunkhannock, James M. and wife Julie, of Tunkhannock, and Jeanette Giles and husband Tommy, of Alabama and many grandchildren and great grandchildren. Graveside services will be held at 11am Wednesday Dec. 23rd at the Lynn Cemetery, Springville, with Pastor Richard Womer of the Tunkhannock Assembly of God officiating.  For online condolences or directions visit http://www.aplitwinfuneralhomes.com