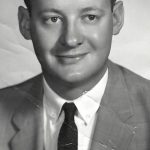 Theodore (Ted) A. Miller Sr. passed away peacefully at his Lake Winola home on October 15, 2019. Ted was born on November 4, 1929 and was the son of Ted and Helen Bender Miller. He grew up in Scranton and spent most of his childhood summers at the family cottage on Lake Winola. He attended Scranton public schools, excelling in the classroom, also achieving the rank of Eagle Scout as a Boy Scout. He graduated from Central High School in 1947 and was the recipient of a full academic scholarship to Lehigh University where he received a Bachelor of Science degree in Industrial Engineering in 1951. He married Merna June Davies on August 9, 1952. They had been married 67 years this past August.

Upon graduation from college he was employed by Latrobe Steel Company. He retired from Latrobe after 32 years of service and was employed for seven years as the Vice President of Sales at Ford Tool and Machinery in Rockford, IL.

Ted never missed his three children’s football/basketball games, piano recitals, and cross country/track events. He was a supportive, caring and loving father and husband. Ted was known throughout his life for his honesty, integrity, and love for the Lord.

Ted and Merna retired to the family cottage that was built in 1911. He loved Lake Winola, and being an avid golfer, he was a member of the Scranton Canoe Club and Emanon CC.

He was a strong Christian and a member of Osterhout Bible Church. Even though he was surrounded by family members throughout his illness, he shared his last moments with his wife Merna.

A Memorial service will be held at Osterhout Bible Church on Saturday, October 26th at 11:00 am. A light lunch will follow.

In lieu of flowers, donations may be made to Osterhout Bible Church, 467 Lane Hill Road, Tunkhannock, PA 18657.