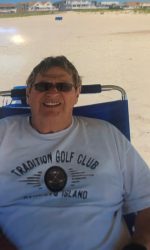 Thomas E. Staffaroni, 70, of Factoryville died at his home on Thursday morning December 2, 2021. Son of the late Elio and Helen Munley Staffaroni. Born in Carbondale on October 24, 1951. Tom and his wife, the former Shirley Parker, have been married for 44 years.

He worked at Metlife in Clarks Summit before retiring then he worked at multiple golf courses in the area. He loved to golf and spend time with family and friends.

Tom is preceded in death by his brother Jack and his sister Elaine Reed.