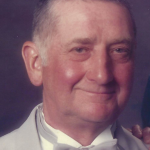 Share Print
Thomas J. Harding, 94, of Tunkhannock, fell asleep in the arms of the Lord Oct. 3, 2020, at his home surrounded by his family.He was born on April 25, 1926 in Eatonville and he was the son of the late Burt and Lillian Barziloski. He was a graduate of Tunkhannock Area High School and was a 4th generation dairy farmer. Tom was married for 62 years to the late former Madelyn J. Avery who died on Jan. 22, 2016.He was a member of the Loyal Order of the Moose and social member of Triton Hose Company, Tunkhannock. He enjoyed family gatherings and spending time with his family, including his “extended family” that congregated at the farm over the years.  He was a man of few words, but when he talked you listened.In addition to his parents and wife, Tom is preceded in death by his  brother Samuel Harding, son-in-law George Dana, two grandsons Dakota Watkins and Chris Traver.Tom is survived by his daughters, Beverly and husband Herbert Traver, Tunkhannock, Sharon Kuback and her companion, Eugene O’Malley, Clifford Twp., Susan Dana,Tunkhannock, Barbara and her husband, John Pollock, Tunkhannock, and Becky and her husband, Jeramy Watkins, Tunkhannock; sister Caroline Kresge, Dalton; 11 grandchildren; 12 great-grandchildren; one great-great grandson and many nieces and nephews.
Graveside Services will be held Wednesday Oct. 7th at 10 am from the Sunnyside Cemetery,Tunkhannock with the Pastor Lori Robinson officiating.In lieu of flowers, memorial contributions may be made the Triton Hose Company, 116 W. Tioga St.,Tunkhannock, Pa 18657.A Celebration of life will be held at a later date. For online condolences please visit www.aplitwinfuneralhomes.com.