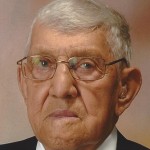 On August 8, 2015, Springville lost an old and dear friend.Willard W. Loch has filled his last bottle of Maple Syrup, finished washing thewool and caring for his abundant garden. He died doing what he loved. Willard, the son of William and Emma Racibor Loch was bornApril 24, 1927 in Scranton. In 1942 after purchasing the farm the family movedto Springville. Work on the farm was hard and dangerous. At age 19, Willard waskicked in the face by a horse, breaking both jaws and losing all of histeeth.   On June 4, 1949 Willard married Hilda Cokley. They wereblessed with 64 years of marriage until Hilda’s death November 18, 2013. Throughout his life Willard worked at a variety of jobsincluding Golden’s Feed Mill where he enjoyed starting the water wheel andlistening to the building come alive.  Healso work for Novitch Trucking, and in the Procter and Gamble warehouse. His favoriteactivity has been helping his son Randy at Loch’s Maple Syrup and Loch’ FiberMill. He enjoyed assisting with the concession stand at local events andmeeting old and new friends. Known as “Pop” he was the person willing to Handout samples of Maple products at all the fairs. At the Bloomsburg Fair he wouldpeel 50 to 100 pounds of onions a day without a tear for a fellow vender.Always happiest when he was busy and helping others, he could be found washingdishes for the Springville Fire Co. Sunday “All You Can Eat Breakfasts”. Hecontinued to be active in the fire company as long as his health permitted. Willard is survived by his son Randy and daughter-in-lawJamie, brothers and sisters-in-law William and Lila Loch and Harold and NancyLoch all of Springville, several nieces and nephews and his grand dog Dusty. When asked how he was, he would often reply, “Every day is agood day, some are just better then others.” Funeral services will be Wednesday at 11:00 at Harding-LitwinFuneral Home, 123 W. Tioga St., Tunkhannock, with Pastor Murray Brindle of St.Paul’s Lutheran Church, Tunkhannock, officiating. Interment will follow atSunnyside Cemetery, Tunkhannock. Friends may call Tuesday from 5 to 8 pm and Wednesday from 10until the time of the service. In lieu of flowers, memorial contributions may be made toSpringville Volunteer Fire Company, P.O. Box 107, Springville, PA 18844, or St.Paul’s Lutheran Church, 7652 Route 6 West, Tunkhannock, Pa 18657.