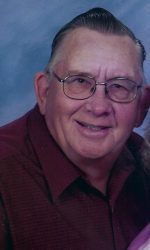 Bill graduated from Tunkhannock High School in 1953 and he enlisted in the US Army Signal Corps stationed in Hawaii.  He was employed at P & G as a technician for 24 years.  After retiring, he was elected Washington Twp. supervisor.  He enjoyed Yankee baseball, Steeler’s football games, deer hunting, and farming.

In addition to his parents, he is preceded by his brother George Miner in 1958.

Funeral services will be held at 12:15 pm on Thursday, March 10th from the Harding-Litwin Funeral Home 123 W. Tioga St. Tunkhannock, with Pastor Seth Maceluseo officiating.  Military honors will be held Thursday at 12noon.  A viewing will be held from 10 am until the time of the service.  Interment will follow at the Vaughn Cemetery, Mehoopany. In lieu of flowers, donations may be made to the charity of your choice.  For online condolence or directions visit www.aplitwinfuneralhomes.com