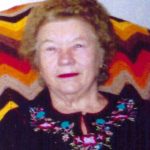 Wilma Jacobs, 90, of Factoryville passed away at the Allied Services Hospice Center on Jan 23 rd 2020. She was born in
Poland on Aug. 28, 1929 and she was the daughter of the late
Adam and Emilie Penzek Dora. She was married to the late Michael Jacobs Sr, who passed away in 1998. Wilma alongside her husband operated their family farm.
Wilma enjoyed gardening, sewing and spending time with family and friends.
In additions to her parents and husband she is preceded in death by a daughter Shirley A. Jacobs and a brother Walter Dora Sr.
She is survived by a daughter Susan K. Jacobs, Son Michael G. Jacobs, brother Helmet Dora and a sister in law Arlene
Trumpore, nephew and nieces Walter Jr. and wife Robin Dora,
Wayne and wife Laurie Doras, Jason and wife Tasha Dora, Nicholas and wife Catherine Dora, Adam Dora, Wayne and wife Susan Morris, Gus Kropa and Debbie Fields.
Funeral services will be private at the convenience of the family. Interment will be at Sunnyside Cemetery.
For online condolences visit www.aplitwinfuneralhomes.com