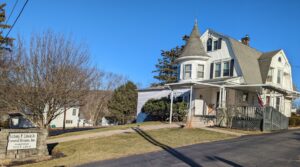 The history of Anthony P. Litwin Funeral Home in Factoryville was taken from the book titled The “Hollow” in the Beech Woods By Allean Fassett Derr on page 90. In the early days funerals were held in the homes of the deceased. A funeral Director usually made furniture and coffins, and did not have a place where funerals could be held. William L. Follet and George W. Stanton were funeral directors around 1900. The first funeral home was opened by Perry Colvin. He had purchased the home from his parents, William & Rose Wolfe Colvin.

Perry was killed when he fell while repairing the roof.

With the assistance of William “Bill” Wademan, Perry’s wife Bertha continued the business until it was sold in 1950 to Willard H. Baker. Willard had the business for about twenty years and then it was bought by Anthony “Tony” Litwin in March of 1970.

The Harding-Litwin Funeral Home, 123 W. Tioga St. Tunkhannock, where it has been located since January of 1988, has a long history in Tunkhannock. The Funeral home is owned by John F. Litwin, F.D. and Supervised by Collin Lunger.

Anthony Litwin, John’s father bought the Samuel B. Harding Funeral Home, located at 64 Bridge St in Tunkhannock, PA from Sam and Ruth Harding in February, 1987, which then became the Harding-Litwin Funeral Home.

Throughout the years the Funeral Home has strived to serve the residents of the Tunkhannock area with caring service, professionalism and fair prices.