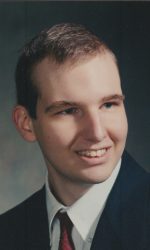 He was a 1999 graduate of the Wyalusing High School.  Anthony was a member of the Saint Mary’s Choir, and he attended the Keystone College, and Mansfield University where he studied mathematics.

In addition to his mother and father Anthony is preceded in death by his sister Laurie Pacifico, and brother Mike Smith.

A blessing Service will be held Saturday at 10 am from Harding-Litwin Funeral Home 123 W. Tioga St. Tunkhannock with Father Joseph J. Manarchuck officiating.  Friends may call at the funeral home Saturday 9 to 10am.    Anthony and his mother Eleanor’s services will be combined.