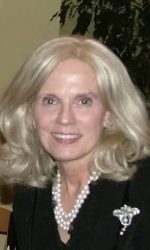 Funeral Service will be Friday Oct.16, 2020 at 12 noon from the Anthony P. Litwin Jr. Funeral Homes, Inc. 33 Reynolds St. Factoryville with Pastor Emeritus Kim Bode officiating. Friends may call at the funeral on Friday from 10am to 12 noon. Interment at Chase Cemetery, Dalton.

Dr. Carolyn Carlson Pencek, 74, of Benton Twp., died Sunday, October 11, surrounded by family. She was born on June 13, 1946, in Appleton, Wisconsin, and was the daughter of the late Arthur E. and Mary N. Carlson. She was preceded in death by the love of her life, Richard, her husband of 45 years.

She is a 1964 graduate of Haverford Senior High School and received her BA in Political Science from Western College for Women in 1968 where she was Senior Class Secretary.

In spring of her junior year, Dr. Pencek participated in Drew University’s United Nations semester. She received her MA from Syracuse University’s Maxwell School of Citizenship and Public Affairs and her Doctorate in Education from Temple University.

Dr. Pencek was Vice President and President of the Junior League of Scranton (JLS). She was chairwoman of several committees including Administration, Nominating and Santa’s Holiday Workshop. She was also the first member of the JLS to be appointed to serve on the Association of Junior League’s Board as an Area Councilwoman.

Dr. Pencek co-wrote the original grants that secured the Tripp House, Scranton’s oldest house, for the JLS. After the restoration by the JLS was completed, the Tripp House was given to an independent group for community use.

Dr. Pencek was a Board member of Meals on Wheels, an Advisory Board member at Penn State Scranton, and Vice President of the Philharmonic Women’s League of NEPA. She was also a Founding Member of Leadership Lackawanna.

For over 25 years, Dr. Pencek was a member of the Lackawanna County Children and Youth Services Advisory Board where she also served as Secretary, Vice President and President, and she is listed in Marquis Who’s Who.

The family would like to thank all the caregivers who have helped Carolyn these past few years, especially Michele Cook.

Funeral Service will be Friday Oct.16, 2020 at 12 noon from the Anthony P. Litwin Jr. Funeral Homes, Inc. 33 Reynolds St. Factoryville with Pastor Emeritus Kim Bode officiating. Friends may call at the funeral on Friday from 10am to 12 noon. Interment at Chase Cemetery, Dalton.

In lieu of flowers, memorial contributions may be made to the St. Joseph’s Center in Scranton, PA or the Junior League of Scranton.