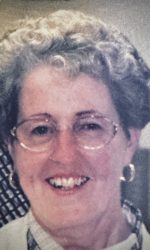 Catherine Peterson, 90, of Tunkhannock passed away at the Allied Services Skilled Nursing Center on Nov. 28, 2022.  She was born on March 8, 1932 in Pittston Pa. and she was the daughter of the late Frank Kilgallon and the late former Margret Mulhern.  She was married to Joseph Culver whom passed in 1983 and Raymond Peterson who passed in 2005.  Catherine worked at Tyler Hospital for over 40 years as the head of the Imaging department. In retirement she was a dispatcher for the Sun City Center Security Patrol.

She graduated from Saint Mary’s High School and Mercy Hospital School of X-Ray.

Catherine was a founding member of The Tyler Hospital Credit Union.  She enjoyed Broadway Shows, Reading, Crosswords and Ceramics.  She belonged to the National Association for Retired Credit Union People, and BPW.

In addition to her late husbands and parents Catherine is preceded in death by a sister Claire Simonson of Inianapolis, IN,