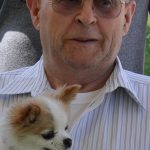 Charles C. Wright, Sr., 83, of Tunkhannock passed away unexpectedly at the Abington Manor on Feb. 23, 2020.  He was born at the Mills Hospital in Towanda, PA on July 5, 1936 and he was the son of the late Curtis and E. Margaret Chamberlain Wright.  He was married to the former Barbara Joyce Shedden on June 15, 1957.

Charles was a graduate of the LeRoy Grade School and the Canton Area High School class of 1954.  Charles was a member of the Open Hand and Beech Flats Granges and enjoyed bowling.

Charles was employed at Sands Theater Enterprises, managing the Wysox and Starlite Drive-in Theaters. He was a truck driver for Towanda Wholesale, W.H. Johns Trucking, Acme Markets, and AWI Associates. After retirement, Charles was a security officer at the Wyoming County courthouse.

He was preceded in death by brothers Rex and Stanley Chamberlain.

A graveside service will be held Saturday, February 29th, at the Sunnyside Cemetery, Tunkhannock at 11am, with friend Brad Goodman officiating.  In lieu of flowers memorial contributions may be made to the American Heart Association https://www.heart.org.  For online condolence visit www.aplitwinfunerlahomes.com.