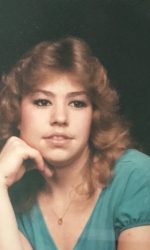 Share Print
Denise J. Sechrist, 56, of Tunkhannock lost her courageous, hard-fought battle with melanoma,  surrounded by family at Regional Hospital on June 21, 2022. She was born in Willoughby Ohio on February 8, 1966, and was the daughter of the late James Sherwood Freeman and Laverne (Wendel) Busch. Denise was married to her best friend, David Sechrist Jr., they would have celebrated their 37th anniversary this July.

In addition to her father, she is preceded by her in laws Barb and David Sechrist, brother-in-law Jeff Sechrist, and stepfather John Busch.

In addition to her husband and mother she is survived by daughters; Nichole and husband Conrad Garinger of Hunlock Creek, Elizabeth and husband Steven Deininger of Mehoopany, son Jeremiah Sechrist of Tunkhannock, daughter in law Gina Sutton of Tunkhannock, 13 grandchildren, several nieces and nephews, and her beloved dog Ruger.