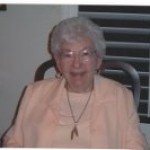 Jo Warnken(97) passed away May 6, 2015 surrounded by family at Avow Hospice in Naples.

Following graduation from business school, Jo was employed by Kansas State University during World War II when she met and married the love of her life, Howard, then a horse cavalry soldier in the U.S. Army at nearby Fort Riley. Following assignments in California and Louisiana, Howie was deployed with the 9th Armored Division to the European Theater while Jo returned to Topeka to await his return at the end of the war. Following the war, they settled in Westfield, New Jersey until 1952 when Clarks Green, PA became home for the next 37 years. Jo and Howie became part-time residents of Naples in 1976, making it their permanent home in 1989. For many years, they enjoyed golf at the Scranton Country Club in Clarks Summit, PA and Royal Poinciana County Club in Naples.

Jo had many dear friends in Naples and Pennsylvania but, above all, she cherished her family. Whether it was providing baking tips in the kitchen, playing cards, or watching her kids and grandkids in various sporting activities, Mom and Grandma was always there to offer encouragement or just a big hug. Her family misses her terribly but feels profoundly blessed to have had her in their lives.

A public visitation will be held on Wednesday, June 10 from 10:00 to 11:00 AM at the Anthony P. Litwin Jr. Funeral Homes, Inc., 33 Reynolds St., Factoryville. A private family service will follow at the convenience of the family.