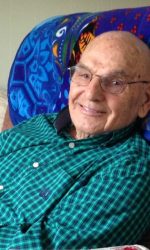 Edward N. Yarasavage, 95, lifelong resident of Washington Township, passed away on June 20, 2021. He was born February 6, 1926, son of the late Simon and Michelina Hermonovich  Yarasavage.

Ed was a graduate of Tunkhannock Area High School, class of 1943. He was a member of the US Navy from 1945 to 1947, where he served in the South Pacific. After serving in the Navy he returned home and ran a dairy farm. In 1951 Ed was appointed Justice of the Peace for Washington Township and served several terms. In 1966 he was one of the first 100 employees hired by Charmin Paper Products for the Mehoopany plant. He worked there until his retirement in 1987. Ed was famous for his delicious sweet corn that he raised for over 50 years on his Keiserville Road farm. Ed was a very active member of Saint Paul’s Lutheran Church where he served in various capacities. He was influential in organizing the annual dinners and hosted the annual chicken barbecue.

Ed married his late wife Gladys (Jones) in 1950. They celebrated 61 wonderful years together. Ed and Gladys enjoyed traveling the US, Canada and Europe and spent many winters in their home in the Myrtle Beach, South Carolina area.

Services will be held on Tuesday, July 6th, at St. Paul’s Lutheran Church, 5672 Route 6, Tunkhannock. Visitation will be 9:30-11:00am, with funeral services  beginning at 11:00am. Officiated by Rev. Kim Bode, followed by the internment service at Sunny Side Cemetery.

Memorial contributions may be sent in Ed’s name to St. Paul’s Lutheran Church.