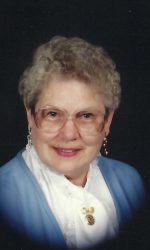 Born in Harding on May 5, 1929 she was the Daughter of the Late Kenneth and Eleanor{Swartwood} Hoover.

Eleanor worked at Rowker Manufacturing in Tunkhannock, before becoming a stay at home mom.

She had a great love for the outdoors, and enjoyed watching her favorite bird the Cardinal.

Eleanor is preceded in death by her husband of 61 years Milton R., who passed away in 2018, Son Milton C.,   who passed in 2011, Brothers Kenneth {June}, Herbert {Herbbie}, and Howard Hoover, and Nieces and Nephews.

Memorial contributions may be made to the Damon S. Young Memorial Scholarship, C/O Randy White 9 Jayne Road, Tunkhannock, Pa. 18657 or a charity of the donor’s choice.

Live Streaming of Eleanor’s funeral will be available on Facebook Thursday starting at 4pm.