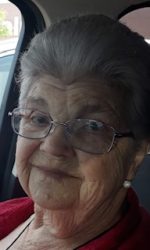 Elizabeth A. Pickering, 85, of Tunkhannock passed away at Regional Hospital of Scranton on May 3, 2022. She was born in Endicott NY on July 26,1936, and she was the daughter of the late Charles Edward Wheeland and the former Anna Rosengrant.
Elizabeth was married to Harold Pickering who passed away in 1967.

Elizabeth was a member of the Eatonville United Methodist Church, enjoyed quilting, cooking, canning and her grandchildren.

In addition to her husband and parents she is preceded in death by her daughter Rhonda Chalkan, an infant granddaughter, brothers Clayton and LeRoy Wheeland, sisters Dora Gregory, Virginia Cambell, Carol McPhillips, and Joyce Welch.

Funeral services will be held Monday May 9th at 11am from the Harding-Litwin Funeral Home 123 W. Tioga St. Tunkhannock. A viewing will be held from 10am until the time of the service. Interment will follow at the Sunnyside Cemetery. For online condolences or directions visit www.aplitwinfuneralhomes.com