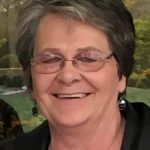 Eva Nancy Williams, 68, of Tunkhannock passed away at the Sacred Heart Hospice Dunmore on March 20, 2020.  She was born in Brooklyn, NY and she was the daughter of the late Joseph and Vivian Novack Heil.  She was a graduate of the Scranton Technical High School and was married to Donald Williams, Sr. for 41 years. She enjoyed camping in Canada, knitting, crafting, and spending time with her grandchildren.  Eva also served on the Washington Township Elections team.  In addition to her parents, Eva is preceded in death by brothers Joseph and Michael Heil.  In addition to her husband, Eva is survived by her children; Bridget and husband Randy White of Tunkhannock, A.J. and wife Anita Lello of South Abington Twp., Dawn Williams John Algar of Tunkhannock, Donald Williams, Jr. and Heather Lee Underwood, Springville,  Stacy Williams, Tunkhannock.  Grandchildren; Damien Williams of Hunlock Creek, Evanna Lello and Tomaso Lello of South Abington Twp.  In addition, Eva is survived by a brother Stephen Heil, Lake Carey.  A graveside service will be held at 11am on Tues March 24th at the Sunnyside Cemetery Tunkhannock with Ernie King officiating. The family will be holding a memorial service at a later date.  In lieu of flowers memorial contributions may be made to the St Joseph’s Center 320 S. Blakely St. Dunmore, Pa. 18512.  For onlinecondolences or directions visit www.aplitwinfuneralhomes.com