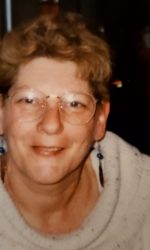 Evelyn M. Ward, 76, of Tunkhannock passed away at the Riverview Nursing Home, Wilkes-Barre on Dec. 21, 2022.  She was the daughter of the late Elroy Thompson and the late former Maria Matushefske.  Evelyn was married to the late Stanley Ward.

Services will be private at the convenience of the family.  www.aplitwinfuneralhomes.com