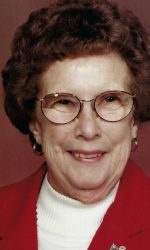 Flora Spangenberg, 93, of Tunkhannock passed away at her home surrounded by her family on January 7th, 2023.  She was born in West Pittston on Jan. 1, 1930, and she was the daughter of the late Howard Gardner and former Edna Swank.  Flora was married to the late Paul Ernest Spangenberg on Sept. 11, 1948, and he passed away in 2006.  Flora helped run the family excavating business as an administrative assistant.  Flora and Paul enjoyed laughing, traveling across the U.S. with the company of friends, and raising their children together.  Flora was blessed to be surrounded by kind thoughtful, and supportive neighbors and friends.  Her family is deeply grateful to the community and to the friends at the Russell Hill Methodist Church.

In addition to her parents and husband of 58 years, she is preceded in death by her sisters Lois, Evelyn, Jesse, Vera, and brothers Sam and Ed.

Donations may be made to the Tunkhannock ambulance, Triton Hose Fire Company, Allied Home Health and Hospice, and the Russell Hill Methodist Church.

Funeral services will be held at 12noon on Wednesday Jan. 11th at the Harding-Litwin Funeral Home 123 W. Tioga St. Tunkhannock.  A visitation will be held from 11am until the time of the service.  Interment will follow at the Sunnyside Cemetery Tunkhannock.  For online condolences or directions visit www.aplitwinfuneralhomes.com.