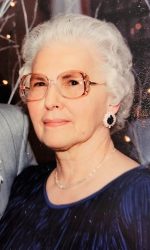 Gladys was an employee of the former Endicott Johnson Shoe Company for many years where she faithfully served in their business office. After retirement, she and her husband, Alton, enjoyed traveling throughout the country with the P &G retirees on many excursions and volunteered her time with the retirees helping with local blood drives.

For many years she attended Tunkhannock Baptist Church and later, for a short while, Community Bible Church, Tunkhannock, until she was no longer able.

Gladys considered herself very blessed to have had a few dear friends and neighbors who faithfully shared their time, families and care with her over the last several years.

As well as her husband and parents, she was predeceased by her sister and brother in law, Charlotte StClair Eveland and Lloyd Eveland formerly of Tunkhannock and brother, Arnold StClair and sister-in-law, Mary Crea StClair formerly of Largo, Florida.

She is survived by her son, Dennis, and wife, Melody, of Tunkhannock. Also being survived by nieces, Ginger Cragle (Richard) of Tunkhannock, Sharon Coole (William) of Noxen, and nephews Randy StClair of Seminole, Florida, Gary Eveland (Raylene) of Laceyville, and Gregory Montross of Noxen as well as several grand nieces and nephews.

A graveside service will be announced at a later date.

Interment will be at the Sunnyside Cemetery.