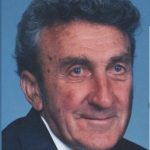 Henry was the last surviving child of the seven in the family of John and Frances Anuszewski Kalinowski, who operated a very beautiful, successful farm on German Hill, PA. His upbringing there established the pattern of hard work that he parlayed into a lifetime of success in the lumber business.

Of course, like many of his generation, Henry proudly served in World War II. Although he could captivate a listener with a long history of how he got there, he ended up at Stewart Field near West Point, where he served as a fireman, protecting incoming and outgoing aircraft.

When he returned home after his military time, Henry cut and hauled props he took to various coal mines in the area. In 1961, Henry, then 38, went into a partnership, the D & K Lumber Co., and purchased Harry Walter’s sawmill in Stonecrest. As the business thrived, it outgrew that facility, and, after only a few years, a new facility was built. Henry took great pride in the fact that the mill was the first band-saw operation in the area.

In 1974, the mill was sold to Deer Park. Some years after that, Henry started operating a circular mill on Billings Mill Road, called the Lake Carey Lumber Co., where he was converting logs into boards until the age of 92 or so.

Henry was an avid sportsman who enjoyed deer hunting, fishing, and boating. For a period of time in the late seventies, Henry and Helen bought, refurbished, and offered for rent two cottages at Lake Carey. He was one of the first, with approval from the Commonwealth, to build a dock supported by a concrete pier that is in place to this day.

His mechanical ability was limitless. He could fix anything with moving parts, and his “cheapest tool” was grease! And, as many of his generation, he would never throw anything away! To wit: the many old parts in his garage, whether they be old worn-out electric drills, brake mechanisms or Helen’s old Kirby vacuum!

In addition to his parents, Henry was preceded in death by an infant daughter, Frances, his sisters, Lillian, Bertha, and Helen; his brothers, Edward, Stanley, and Charles. Surviving are his children, Judith (Howard) Griggs, Henry Jr., Robert (Stefanie), and June-Ann (John) Bussolini. He is also survived by four grandchildren: Matthew and Andrew Kalinowski, and Jeffrey and Janice Griggs.

A visitation has been scheduled for Monday, March 2, from 6 to 8 p.m. at the Harding-Litwin Funeral Home 123 W. Tioga St. Tunkhannock. Military honors will be held at 7:45pm on Monday from the funeral home. The funeral mass will be held on Tuesday, March 3 at 10 a.m. at Nativity BVM Roman Catholic Church, 99 East Tioga Street, Tunkhannock, PA 18657. Interment at Mount Carmel Cemetery, Tunkhannock.

In lieu of flowers memorial contributions may be made to Nativity BVM Roman Catholic Church.