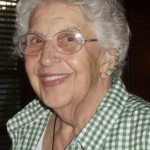 Share Print
Irene Stonier Clark, 85, of Tunkhannock passed away July 17, 2015 at the Golden Living Center in the arms of her loving family.
She was born at home near Lake Carey on August 4th, 1929, the daughter of the late Spencer and Florence Goodfield Stonier. Irene’s husband of 38 years was Jay Tripp Clark, who passed away on March 9, 1989. She was an active member of the Eatonville Baptist Church.
Irene’s life was devoted to her family, her love of God, and her beautiful flower gardens. She hunted and fished with her father, husband, and sons. She was a loving mother, grandmother, aunt and friend. She will be deeply missed.  Irene was a graduate from the Empire Beauty School.  For ten years Irene ran the Kountry Korner Market in Lemon with her husband and daughter.
In addition to her parents, she was preceded in death by her son Norman Clark, sisters Ellen and Gerald Labar, Edna and Jim Greene, and Amber Stonier, brothers Wallace Stonier, Henry and Ester Stonier, Leon and Doris Stonier,  grandson Preston Sherman, and daughter-in-law Mary Boner Clark.
Irene is survived by her daughter and son-in-law Amber and Edward Zygmunt, Laceyville; son and daughter-in-law Donald and Linda Clark, Tunkhannock; son Roy Spencer Clark, Meshoppen; son G. Mark Clark, Springville; sister-in-law Ruth Monsey Stonier; daughter-in-law Pat Clark, Springville; 11 grandchildren; 15 great-grandchildren and 1 great-great grandson.
The family would like to thank the staff at the Golden Living Center for the kindness, care and compassion they bestowed upon Irene in her time of need.
Funeral service will be held Tuesday, at 10 AM at the Harding-Litwin Funeral Home, 123 West Tioga Street, Tunkhannock with Pastor Kurt Bricker of the Eatonville Baptist Church officiating.
Interment will be at the Sunnyside Cemetery, Tunkhannock.
Friends may call Monday from 5 to 8 PM at the funeral home.
In lieu of flowers, memorial donations can be made to the Eatonville Baptist Church, Tunkhannock or the Endless Mountains Nature Center, 1309 Vosburg Road, Tunkhannock, PA 18657.