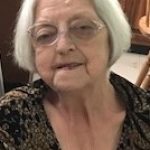 Jean Yablonski, 85, of Tunkhannock passed away Jan. 8, 2020 at The Gardens of Tunkhannock.  She was born in Luzerne on June 20, 1934, and she was the daughter of the late Walter and Stella Pickarski Konopke.  Jean was married to the late Bernard A. Yablonski whom passed away in 2004.

In addition to her parents and husband Jean is preceded in death by a brother Steve Konopke.

A mass of Christian burial will be held Tuesday Jan. 14th at 10am from the  Nativity of the Blessed Virgin Mary 99 E Tioga St, Tunkhannock, PA.  Interment will follow at the Pieta Cemetery Tunkhannock.  A viewing will be held at the Harding-Litwin Funeral Home 123 W. Tioga St. Tunkhannock, Pa. from 5-8pm Monday Jan. 13th.  For online condolences or directions visit www.aplitwinfuneralhomes.com