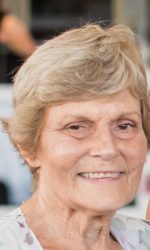 Jeanine was born during the Depression and was the oldest of Robert and Helen (Cox) Parquette’s seven children.  Growing up she never lived in the same place for more than two years since her father’s job building bridges and roads took the family throughout the US and Canada. Despite never being settled, she excelled in school. Jeanine was blessed with beauty, brains, and athleticism and as her brother Dick said, “Nini was special”.  Not only was she often top of her class; she was homecoming queen, had a passion for softball, and loved to dance.  Jeanine was a true Renaissance woman.

Jeanine graduated as a physics major from the University of Colorado at Boulder in 1954 where she was one of only four women in the engineering school.  After graduation, she worked for Sperry Gyroscope Corporation as one of the first women in the engineering department. Early on, she was stationed in Hawaii designing algorithmic methods for early computer control systems.  Given her French last name, she was affectionately known as “Frenchy” by her coworkers. It was there that she met John Ripple (“Rip”) her husband of 65 years. As the story goes, Rip was instructed by coworkers not to get into any serious relationships because he needed to meet Frenchy when she returned from Hawaii.

Jeanine and Rip married in 1957 and moved to Martha’s Vineyard, MA where Rip was stationed, and where their first child, Michael, was born.  A year later they moved to Huntington Station, NY where they raised 5 children.  During that time, Jeanine earned a Master’s in Education and subsequently taught math at Walt Whitman High School for 17 years.

Jeanine and Rip were parishioners of St. Hugh of Lincoln Church and avid bridge players in the church’s bridge league winning numerous first place awards throughout their marriage.

Jeanine is survived by her husband John (Rip); siblings: Sherry Lousberg, Bill Parquette, Marsha Spanswick, and Suzanne Parquette; her children: Michael (BettyAnn), Jeanine LaLena (Dave), John (Joan), and Rebecca; Her grandchildren: Nicki, John, Kaity, Katherine Marcus (Michael), Marina, Natasha, and Victor. Her great grandchildren: Davina and Kya and many nieces and nephews; and was predeceased in death by her siblings Jack and Dick and her son Bill.