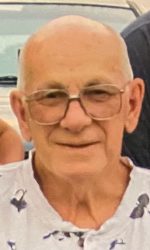 Services are private and at the convenience of the family.

Brothers Bud and Courtney and sisters Ethel and Helen, all preceded John in death.

He is survived by sons John and Kurt and daughter Dawna Hairston and former wife Marlene and grandchildren Kaia, Aubrey, Tyler, Tanner, Trey and Shae and several nieces and nephews.

John grew up in southern N.J. and attended public schools in Collingswood. After graduation from Collingswood High School in 1951, John enlisted in the United States Airforce. He was trained in B-29 aerial gunnery and flew on combat missions over North Korea just prior to the cease fire in July 1953. During his last year of a four-year enlistment, he was on air refueling crew member on a KC-97 with the Strategic Air Command based at MacDill AFB, Tampa, FL.

Discharged in 1955 John returned to southern N.J. and worked at various jobs and spent his income on his hobby- foreign cars. It was during this period he sensed there had to be something more and meaningful in life than owning sports cars. By chance one Sunday night he went to a Methodist Church and listened to a sermon by a recovered alcoholic at that service John made his profession of faith in Jesus and received forgiveness. It was a turning point for John he decided to study the Christian faith by seeking admission to Eastern College in David, PA. He graduated with a BA in 1962 and then went over to study Theology at Eastern Seminary. He graduated in 1966 with a BD and was subsequently ordained in the Christian ministry by the First Baptist Church in Collingwood, NJ. Endorsed by American Baptist Churches, USA. John entered the US Army as a military chaplain in 1967.  As a Army chaplain, John received numerous posts in the continental U.S., Germany and two tours of duty in Vietnam. Upon retirement from the military in 1983 John pastored a local church and then worked at Gay’s True Value from 1993 to 2015. John enjoyed reading, oil painting, fishing, tennis and his cat Alley.  Eventually became a cat lover because of Alley. Living alone the last years of his life John enjoyed the friendships he was able to have and his employment at Gay’s True Value. He especially enjoyed visits from his children all of whom reside out of the area. Tom Deitzer showed him how to catch bass in the Susquehanna River. His surrogate granddaughter Chelsey Whitmiller kept him in touch with the younger generation and together they had many discussions on contemporary issues.

Services are private and at the convenience of the family. Arrangements by Harding-Litwin Funeral Home, Tunkhannock.