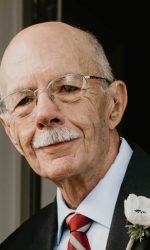 Joseph Anthony Mitchell, 82, of Tunkhannock passed away on Sunday June 13, 2021 at his home.  Born in Pittston on April 8,1939.  He was the son of the late Anthony and Genevieve Chivacci Mitchell.

Joe was a 1956 graduate of Falls-Overfield High School.  He served his country as a Military Police in the United States Army and was employed at Proctor and Gamble for over thirty years.  Joe attended Nativity Blessed Virgin Mary Church in Tunkhannock.

Joe’s greatest love was spending time with his family.  He was known for his humor and leaves his family with countless stories to share. He enjoyed his days on the golf course, trap shooting, and attending motorsport events.  Most recently he was voted “Employee of the Year” at Avery Mountain Bines & Twine.

He is survived by his loving wife of sixty- five years, Betty (Avery) Mitchell; daughter Lisa Kibler and her husband Charles of Concord, NC, his son Joseph Mitchell and his wife Sharon of Durham, NC, and his brother Gary Mitchell of Florida.  He is also survived by five grandchildren; Kimberly Tenbus, Amy Turner, Kelli Lyerly, Dalton Mitchell, and Sarah Mitchell, as well as five great-grandchildren.

In addition to his parents, Joe is preceded in death by his brother Donald Mitchell.

A blessing service will be held on Thursday, June 17, 2021 at 8 pm at Harding-Litwin Funeral Home, 123 West Tioga Street, Tunkhannock with Deacon Ray Peretti officiating.  Friends may call at the funeral home on Thursday from 6 to 8 pm. Interment will take place Friday at 11 am at  the Pieta Cemetery, Tunkhannock.  For online condolences or directions visit www.aplitwinfuneralhomes.com.