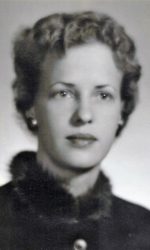 Share Print
Mary E. Tripp, 94, of Tunkhannock passed away at her daughter’s home on Jan. 15th.  She was born in East Lemon on July 18, 1928 and she was the daughter of the late Arthur and Marion Stark Shaw.
Mary was a 1945 graduate of the Tunkhannock High School and received her R.N. degree from the Moses Taylor School of Nursing.  She also received post graduate credits from Keystone Junior College.  She was a member of the Wyoming County Chapter of the Red Cross.  Mary worked many years at the Tyler Memorial Hospital, and she retired after 15 years of service from the Clark Summit State Hospital.
Mary enjoyed gardening, her cats, and spending time with her children and grandchildren.
In addition to her parents, she is preceded in death by sisters Jean Loomis, and Ruth Davis, brothers Charles Shaw and Arthur Shaw.
She is survived by her daughters; Melissa Alsop and husband Frank of RI, Laurie Miller and husband Brett of Tunkhannock, and Jennifer Frankevich of Dallas, grandchildren; Mary Miller, Matthew Miller and wife Harley, Grace Miller, Cody Alsop, Justin Alsop, and Joshua Frankevich, brother Edward Shaw and wife Lois of N.C, and several nieces and nephews.
Funeral services will be held Sat. Jan. 21st at 10:30am from the Tunkhannock United Methodist Church 4 Church St, Tunkhannock, PA.  A viewing will be held Friday Jan. 20th from 6-8pm at the Harding-Litwin Funeral Home 123 W. Tioga St. Tunkhannock, Pa.  Interment will be at the Starkville Cemetery, Tunkhannock.  For online condolences or directions visit www.aplitwinfuneralhomes.com