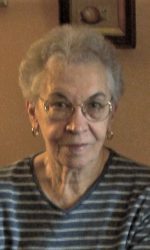 Mercedes M. Anderson, 92, of Tunkhannock died Wednesday November 22.  She was born on February 17, 1925, and was the daughter of the late Frank E. Walters and the Late Catherine McMenamin Walters Powell, both of Atlantic City, NJ.  She was preceded in death by her husband, Wesley H. Anderson in 2007.

Merce was a long-time member of Nativity of the Blessed Virgin Mary Parish in Tunkhannock and she was active in the Altar and Rosary Society there in the past years.  The family is very grateful to the caring staff at the Methodist Manor in Tunkhannock for helping make her final years as comfortable and happy as possible.