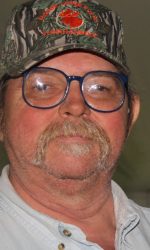 Born December 15, 1952 in Carbondale, PA to the late Evelyn  and Lee Stark. He is survived by his wife and love of his life Ann Marie Yurksza Stark. They celebrated their 33rd wedding anniversary on November 15, 2020.

Sparky was a graduate of Tunkhannock High School class of 70, during Sparky’s high school years he was an outstanding basketball player. Sparky served in the US Air Force at Offutt Air Force Base in Omaha, Nebraska. After leaving the Air Force he moved to Aiken, South Carolina, moving back to the Tunkhannock area in the late 70’s. He met Ann Marie in 1981 and they moved to Columbia, South Carolina, residing there for eighteen years before moving back to Northeastern, Pa.

Sparky had many talents, working for McKohn printing and Hilton Service in South Carolina. Joining Brown’s Tree Service after returning to the local area.

Sparky was a diehard Gamecock and Steelers fan. Enjoyed watching sports of all kinds, his biggest joy was watching court shows and CNN with feline buddies, Mac and Cheeze by his side. He enjoyed painting humorous images on rocks for friends and family long before it became fashionable. He was a natural storyteller and enjoyed recalling exploits with friends and opining on recent topics. Whenever Sparky and friends got together uproarious laughter would ensue.

Sparky was a member of Moose Lodge 1276 and the American Legion Post #0967. One of his favorite times was enjoying friends and family during the annual Rattlesnake Roundup and firepit Fridays and Saturdays with neighbors.

Surviving in addition to Sparky’s wife is his daughter Brandy Banaszek, husband Joe and grandchildren

Joey and Arianna of Hampton, Va. His son Travis Crain„ wife Stephanie and grandson Trevor of

Funeral services will be held Wednesday Feb. 10th at 5pm at the Harding-Litwin Funeral Home 123 W. Tioga St. Tunkhannock, Pa. with Pastor John Shaffer assisted by Lori Robinson officiating.  A viewing will be held from 3-5pm at the funeral home.  In lieu flowers memorial contributions may be made to the Meshoppen Cat Rescue http://meshoppencatrescue.com/donations.  For directions or online condolences visit www.aplitwinfuneralhomes.com.