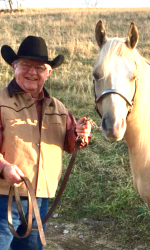 Share Print
Raymond Arthur Anderson, 75, of Meshoppen, passed away surrounded by his loving family at Regional Hospital, Scranton on April 22, 2022. He was born on February 6, 1947 in Tunkhannock and was the son of the late Miles and Beulah VanDeMark Anderson. He was a veteran of the U.S. Army and a member of the Elk Lake Community Church.
Ray was married to the former Holly Jean Kintner for nearly 33 years. Throughout Ray’s life, he worked as both a fuel delivery man and drywall contractor. However, he was most well known as a competent farrier. Ray was known throughout northeast PA for his farrier skills and his care for horses. He was a 4-H leader, a former deacon at the Eatonville Baptist church, and more recently served on the Elk Lake Community church’s board. He enjoyed hunting, fishing, good conversation, and most of all, riding and showing horses with his family.
Ray was the youngest of 17 children. He is preceded in death by his daughter Becky Ely, brothers Nelson, Robert, Edward, Roy, John, Miles, and Ralph, and sisters Anna and Emma Anderson, Naomi Wilsey, Ruth Hartman, Beulah Mae Barron, and Lois Button.
In addition to his wife, he is survived by his son Brian and wife Lisa Anderson of Factoryville, daughter Cody and husband Joseph J. Caprio III of Mehoopany, brother Lyle Anderson of Tunkhannock, sisters Shirley Anderson of Tunkhannock, and Thelma Anderson of Scranton, grandchildren Brian Anderson Jr. of Wilkes Barre, Samantha Ely of Montrose, Gideon Caprio of Mehoopany, great-grandchildren Darren Ely, Jaxon Frantz, and Logan Anderson, and countless nieces and nephews.
A viewing will be held Wednesday, April 27 from 5-8 pm at the Harding Litwin Funeral Home, 123 W. Tioga St., Tunkhannock, PA. Funeral services will be held at the same location at 11 am the following day, April 28. Interment will be held at Vaughn Cemetery in Mehoopany with a luncheon to follow. In lieu of flowers, donations may be made to the Endless Mountains Riding Club, 1620 SR 367, Laceyville, PA 18623. For online condolences or directions visit www.aplitwinfuneralhomes.com