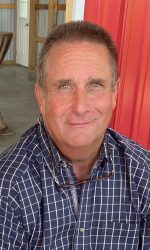 Robert (Rob) Scott McCauley, 60, of Tunkhannok passed away at his home on June 16, 2022.  Rob was born in Harrisburg, PA on August 12, 1961, and was the son of the late Donald and Jacqueline Krause McCauley.  Rob was married to Brenda Long McCauley for 37 years.  He was a partner of the Davis Insurance Agency, where he had an office in Tunkhannock.

Rob graduated from Cedar Cliff High School in New Cumberland, PA.  He received a bachelor’s degree from Lock Haven University in 1983.  Rob played football for four years and was a member of the 1979 Pennsylvania State Athletic Conference (PSAC) Championship Football team.  He was very active in the Bald Eagle program helping student athletes.  He was a major donor to Lock Haven University and a benefactor of the Bruno DiMartile Scholarship.  Rob treasured his trips to Haiti where he built churches, schools and friendships.  Rob was a dedicated member of AA where he attributed the program to giving himself and his family a new, better way of living.  He enjoyed, most of all, spending time with his wife, daughters, soon to be son in law, and grandchildren, as well as the ones who became family.  He would do anything to protect the ones he loved.  Hosting Sunday dinners and holidays with his entire family held a special place in his heart.  Rob had a passion for his work where his clients became his close friends: he cherished those relationships. Rob enjoyed working on his property and building a place where memories have been and will forever be made.  He enjoyed shooting guns, fishing at the pond, building trails in the woods, soaking in his hot tub, taking his boys on buggy rides, and caring for his lawn.  Rob was one of a kind, he was always go big or go home.

In addition to his parents, he was preceded in death by a brother Michael McCauley, nephew Mikey McCauley, in laws Jean and Bill Long, brother in law Jim DeSombre, sister in law Mia McCauley, and best friend Bruno DiMartile.

A celebration of Rob’s life will be held on June 23, 2022 at Greenley’s Farm 526 Thurston Hollow Rd Tunkhannock, PA. The family will have a private service with close friends and family from 4:00 p.m. until 5:00 p.m. with an open celebration for friends and family from 5:00 p.m. until 7:00 p.m.  In lieu of flowers, Rob’s request is to make amends: choose a person with whom you have a strained relationship with and do your best to make it right because life, put simply, is just too short.