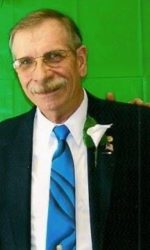 Robert worked at P&G Mehoopany for over 30 years and Mountain Energy after his retirement.  He enjoyed hunting, fishing, camping, golfing, and spending time outside.  Robert was an Army veteran and served during the Korea Conflict.  He was a member of the Dennis Strong Post 457 Tunkhannock, and always participated in military funeral rites in our area.  Robert was also a member of the Moose Lodge, VFW, American Legion, and he was a past commander of Post 457.

In addition to his parents, he is preceded in death by his first wife Susan Seidel, brother Kurt Seidel, and sister Clara Miller.

A military funeral will be held Monday Sept. 26th at 11am from the Harding-Litwin Funeral Home 123 W. Tioga St. Tunkhannock.  Interment will follow at the Vaughn Cemetery Mehoopany.  A viewing will be held Sunday at the funeral home from 5-7pm.  For online condolences or directions visit www.aplitwinfuneralhomes.com