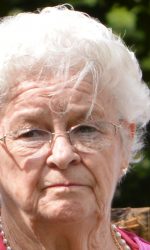 She was born in Scranton, Pa. on July 8, 1930 and, she was the daughter of the late James and Sadie Neat Henry.  Shirley was a member the Lake Winola United Methodist Church

She was a seamstress for many years, and she also was a House Mother for 17 years at the St. Michael’s School for Boys.  She was a member of the Business Professional Women of Tunkhannock, Volunteer of Lake Winola Ladies Auxiliary, Trustee and Former Officer, Volunteer of Tyler Hospital for over 17 years where she received numerous recognition awards for service to the organization and patients.  Shirley was a member of the Republican party, where she served as the Committee Women for Falls Township, where she served with her husband, grandson and granddaughter in law, she was a Republican Executive Board for Wyoming County, and she was an invited guest at several Pennsylvania inaugurations and she was invited to attend Ronald Regan’s Presidential inauguration.  Shirley received the Anis Tyler Public Service Award

Survived by; a son, Gene and wife Gail, Falls; a brother in law Michael Jr., Falls; and sister in law Mercedes Butrymowicz, Duryea. He is also survived by a grandson Gene and his wife Becky and great-grand children MaKayla, Billy, Eddie, and Thea all of Falls; grandson Michael and wife Danielle of Falls; and several nieces, nephews and cousins.