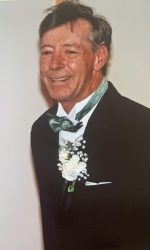 Timothy Blewett aged 65 years passed away at Allied Services Hospice Center of Scranton, PA at 12:45 pm on October 13, 2022. He was the youngest of three sons born to David G. Blewett Sr and Shirley “Sal” Blewett of Dalton, PA. He was a graduate of Lackawanna Trail High School 1974.

He had an avid love of the outdoors, collecting Lionel trains, star gazing, Steven King novels and the Grateful Dead.

Time was predeceased by his mother Shirley “Sal” Blewett (Strom) and his father-in-law Howard Franklin Dimings.

Funeral services for Timothy along with his father David Blewett will be held Friday Oct. 21st at 12noon with Ernie King officiating from the Harding-Litwin Funeral Home 123 W. Tioga St.  A viewing will be held from 10am until 12noon for Timothy and David at the funeral home.  Interment will follow at the Fairlawn Cemetery Dalton.  For online condolences or directions visit www.aplitwinfuneralhomes.com.