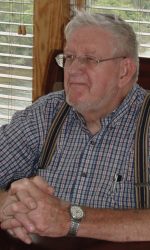 William F. Sill, born July 8, 1934 in Canton, Bradford County PA, was the eldest son of Clyde and Freda Ameigh Sill. The Sill family traces their roots to England with earliest immigrants coming first to Connecticut around 1610, about 1769 to the Wyoming Valley, and after the Revolutionary War migrated west to Bradford County. Mr. Sill and his wife Ardena came to Tunkhannock in 1967, where they built a home on what is known now as Sill Hill Road. He is survived by wife Ardena of Potsdam NY whom he married in 1957; brother Charles in Forest Lake VA; a sister Ruth in Pottstown PA; a brother Steve in Front Royal VA; son Patrick in Sun City Center FL; son Mike in Bothell WA; daughter Suzanne of Tunkhannock; son John in Spartanburg SC; daughter Barbara Gaylord in Northampton PA; and many grandchildren and great-grandchildren, nieces and nephews. Mr. Sill served two years with the US Army 1954-1956, and worked on various engineering projects for General Electric (including space program Project Apollo). In late years he was Safety Engineer and Project Manager for the local Proctor & Gamble plant and once retired from P&G, worked as a consultant for N C Stauffer. He was an active member of the Osterhout Bible Church; served as an EMT and officer with the Tunkhannock Community Ambulance Association; and was a member of the Advisory Council behind the establishment of the County Emergency Communication system (9-1 -1). Mr. Sill was an Advanced Class Amateur Radio operator (KD3XR), amateur architect (designed the family home); and an amateur musician (harmonica). A memorial service will be held Wednesday June 9th at 10am from the Osterhout Bible Church 467 Lane Hill Rd, Tunkhannock, PA 18657 with Pastor Brian Williams officiating. In lieu of flowers memorial contributions may be made to the Osterhout Bible Church. For online condolences visit www.aplitwinfuneralhomes.com