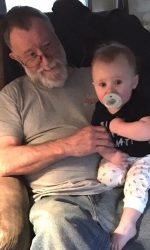 A Celebration of Bill’s Life will be announced at a later date.

Born in Scranton on Aug.16, 1957; the son of the late Fred and Dorothy VanAllen Hughes.

Bill graduated from Lackawanna Trail High School in 1975. He worked the past 25 years at Shupp’s Excavating, Factoryville. He enjoyed hunting, driving, and visiting family and friends.

He is survived by his son William K. Hughes Jr., granddaughter Hailey Hughes of Factoryville; two sisters, Freda Dedrick of FL, Barbara Dryden of AL; and his brother, Charlie of FL.; many nieces and nephews.

A Celebration of Bill’s Life will be announced at a later date. Arrangements by Anthony P. Litwin Jr. Funeral Homes, Inc., Factoryville.