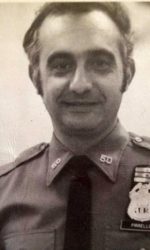 Tom was born June 22, 1936 to Gaspare and Petra Pirrello, Sicilian immigrants, in the Canarsie neighborhood of Brooklyn, NY. He was the third youngest of eight children in a close-knit, Italian family. Shortly after meeting the love of his life by deliberately crashing into her convertible car at a toll booth on the Brooklyn Bridge, they married and moved to Congers, NY. Here Ann and Tom raised three children to whom he was a loyal and devoted father and family man. Tom served 24 years in the New York City Police Department, ending his storied career as a Sergeant in Narcotics in the 46th Precinct. After retirement, he served as Security Director at Marymount College in Tarrytown, New York. He worked long hours and took on countless overtime shifts on the police force to provide for his family and to save money for his children’s college educations. Later, he devoted his life and love to his four grandchildren, never missing a concert, play, recital, soccer game, tennis match. He traveled all over the East coast watching his grandsons play travel soccer and routing them on, with pride and joy. His most cherished job was being a grandparent, and he was the best any child could ask for. He and Ann also traveled the world after retiring, were active in their local Catholic parish, and were rarely separated from one another.

Tom graduated from Fordham University in 1976 with a B.A. in Criminal Justice. He was an avid reader, consuming the New York Times and Wall Street Journal from cover to cover on a nightly basis. He was a history buff who had a special affinity for World War II. He read every book he could get his hands on involving wars, battles, generals, aircrafts and anything else relating to history. He loved to visit museums and made a point of stopping at one along his travels…his favorite always having been the Smithsonian. His interest in world travel started when he was stationed in Germany during his time in the United States Army. And every November he loved to go hunting with his brothers and cousins and play cards and reconnect.

Known as a hardcore New Yorker, Tom personified this role. He was strong, powerful, loud and assertive, a true force to be reckoned with. A cop through and through, he took no guff from anyone. He was fierce. Underneath that tough guy exterior was a loving and generous heart devoted completely to his family. He will be remembered as a hero, a man of honor and integrity.

Tom is survived by his loving daughters, Jennifer (Mick) Cronin of Tunkhannock, PA and Bernadette Pirrello of Carmel, CA, his granddaughter, Cecelia (Mat) Maria of Factoryville, PA, and three grandsons: Aidan (Jordyn) Cronin of Owego, NY, Patrick Cronin of Philadelphia, PA, and Ryan Keating of Carmel, CA. He is also survived by his brothers Sal (Dee) of IndianLand, South Carolina, Joe (Anna) of Paramus, New Jersey and Mildred (Frank) Urso of Goshen, NY. He was predeceased by his loving wife of 61 years, his son, Stephen, three brothers: Tony, Vincent “Jimmy” and Dom, and his sister, Mary.

In lieu of flowers, the family requests donations be sent to the New York Police Department Sergeants Benevolent Society at https://sbanypd.nyc/  For online condolences visit www.aplitwinfuneralhomes.com