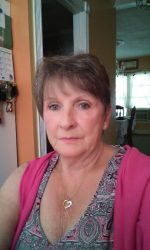 Wendy Louise Sweppenheiser, 69, of Tunkhannock died at her home on December 28, 2022. She was born in Rochester on Oct. 26, 1953 and she was the daughter of the late George Carpenter and the late former Marjorie M. Peters. Wendy was married to Don Sweppenheiser on Sept. 19, 1987. She was a waitress at the Fireplace Restaurant for many years.

Wendy was a master gardener with a certificate from Penn State and an active environmental conservationist. She enjoyed camping, kayaking, and conservation work.

In addition to her parents, she is preceded by her sister Kathleen Smith.

In addition to her husband she is survived by her children; Hilda Bundrick of Washington, Daniel Hodle, Pittston, Gayle Hodle and companion Jim Karpovich of Harveys Lake, John Hodle and wife Amy of Plymouth, Christopher Hodle and wife Lisa of Duryea, stepchildren: Debbie Robinson and husband Tom of Tunkhannock, Donna Sweppenheiser of Evans Falls, Brenda Sweppenheiser, of Mehoopany, brother Jim Burchard of Rochester, George Carpenter of Pittsburgh, and a sister Phyllis Hoyt of Centermoreland.

A special thanks to Bobbi, Tamara, Lori, Chris, Jackie, Dennis of Compassionate Care Hospice of Olyphant.

Funeral services will be held Saturday Dec. 31st at 10am from the Harding-Litwin Funeral Home 123 W. Tioga St. Tunkhannock with Ernie King officiating. A viewing will be held from 9-10am at the funeral home. Interment will be private at the convenience of the family.